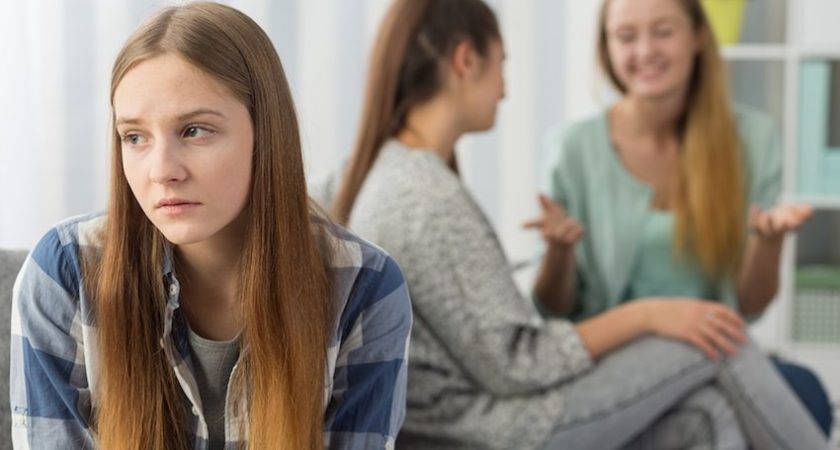 In the fall of 1978 I was just starting high school.

I was excited but mostly nervous and afraid that I wouldn’t fit in.

Fortunately I made some friends quickly and things were going well.

Until the day I had a fight with one of my best friends.

I can’t remember what the fight was about but I can remember that day I went home and cried my eyes out. My whole world had fallen apart.

The next day at school I felt as though everyone had taken her side and I was being ostracized.

It was as though I was infected and everyone was keeping their distance. I wanted to crawl into a hole and die.

Within a few days we got over our fight and once again I was accepted and included.

But I clearly never forgot it – almost 40 years later and I can still cringe at the memory.

As adults we know that we will have disagreements, be excluded sometimes, snubbed and even rejected.

Some people will go so far as to say that they are so confident and secure that it doesn’t bother them if someone doesn’t like them.

I’m going to call bullshit on that.

Unless you’re a psychopath – it hurts.

Rejection and exclusion are deeply painful to us and for good reason.

For millions of years we survived because we lived in tribes.

Being kicked out of the tribe would have meant certain death.

This is why social exclusion affects our brain the exact same way as physical pain does.

When you break your leg or are excluded from a party the same parts of your brain light up.

Your brain is saying, “this is bad – pay attention!”

Remember your brain’s motto is not “be happy,” its “stay alive!”

If it has to make you feel physically bad to pay attention to that snub then so be it.

But social exclusion is even worse than physical pain.

Healing from a broken leg sucks.

But if someone doesn’t like us or excludes us in some way – its personal. We spend hours reliving the experience over and over – torturing ourselves endlessly.

Trying to evaluate what went wrong.

What did I do?

How can I change this?

The result is we end up feeling really bad about ourselves and imagining there is something wrong with us.

It doesn’t matter if we have hundreds of friends, if one person (even someone we don’t particularly care for) doesn’t like us it feels physically, emotionally and mentally painful.

Our brain is constantly evaluating who likes us and who doesn’t. Even just the degree to which someone likes us.

All it takes is to not be greeted in the way we expect and we go into an emotional tailspin.

We can tell ourselves all the reasons it doesn’t matter.

It was probably an oversight.

They just have a lot of stuff going on.

But none of these arguments work against a brain that thinks you’re about to die.

We need the big guns for this.

Something that will rewire our brain for the world we do live in.

A world where not everyone is going to love us like our best friend does and it doesn’t mean we’re going to die if they don’t.

Where sometimes we won’t get the greeting we were expecting and we don’t have to spend hours imagining why that person doesn’t like us anymore.

And let’s be honest.

How many times have we done this only to find out later that everything is fine? We sigh in relief and feel safe again in our world, until the next time…

What we need is Loving Kindness Meditation.

To give you an idea of the power of this practice I want to tell you about a Tibetan Buddhist monk who escaped to India after being jailed and tortured for years by the Chinese.

He was welcomed by the Dalai Lama who asked him, “was there ever a time you felt your life was truly in danger?”

To which the monk replied, “In truth, the only time I truly felt at risk was when I felt in danger of losing compassion for my jailers.”

This is why people look at Tibetan Buddhists and think, “I want what they’ve got!”

If we really do then we should be practicing loving kindness meditation, because this is what they do.

I will admit I hate the feeling of being excluded or of someone not liking me.

But when I do my loving kindness practice I’m able to see more clearly that it’s not personal.

That this is the experience of all humans.

There is no one on this planet that hasn’t experienced this so why should I expect it wouldn’t happen to me?

I don’t feel as though I’m going to die, and I don’t feel the need to ruminate about why they don’t like me.

But most importantly at the end of my practice I can even have some genuine kindness for the person that doesn’t like me. When I reach that point I know I’m OK.

If you would like to try this practice, please click here
for a link to my guided loving kindness meditation.